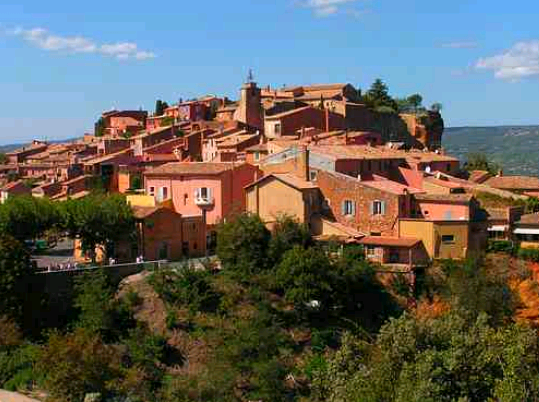 I’m always thrilled when I receive a guest post from Provence expert extraordinaire Sue Aitken and this week’s article is particularly interesting as it highlights a region we’ve yet to visit – the Luberon. Like many others, I read A Year in Provence when I arrived in the south of France, and I feel like many of the « personalities » featured in the book really became my first introduction to the quirky & fun-loving Provençal character. In this post, Sue takes us deeper into the “heart” of the region with a visit to three gorgeous hilltop villages.

As always, a very heartfelt “merci” to Sue for her insightful look at this very special corner of Provence.

The Luberon has always attracted visitors, drawn by the fabulous hilltop villages and spectacular scenery. But it’s become exceptionally popular as a tourist destination since Peter Mayle made the area internationally famous with his book A Year in Provence. This article focuses on three great villages to visit in the Luberon: Gordes, Roussillon and Bonnieux.

This ancient village stands on the edge of the plateau of Vaucluse, facing the Luberon valley. It has been voted one of France’s most beautiful villages. Its houses and buildings made of white stone are rooted into the cliff of a mountain, making it one of the most well-known and most visited hilltop villages in the region.

Gordes has endured numerous invasions, religious wars, the plague, two earthquakes (although nothing very serious) and a bombing at the end of World War II. Despite these setbacks, this ancient village has remained fairly intact to this day.

The village hosts numerous cultural events throughout the summer, and is often swamped with tourists during the summer months. But despite the crowds, Gordes is definitely one of the must-see places in Provence, with charming ancient streets, lovely little boutiques and spectacular views across the Coulon Valley and the Luberon mountains.

Definitely worth a visit if you’re visiting Gordes are the Village de Bories and the Abbey of Sénanque. Bories, is an odd village located just 4km outside Gordes and consists of a collection of houses, walls and barns built entirely of stone, once used by shepherds and hunters. The Abbey of Sénanque, located just 4km outside Gordes, is a Cistercian abbey founded in 1148, surrounded by the most magnificent fields of lavender. Cistercian monks still live there, producing honey, lavender essence and liqueurs.

Tuesday is market day in Gordes. There’s also an annual pottery market that takes place in Gordes in July.

This impressive and picturesque village is most famous for its magnificent red cliffs and ochre quarries. Its striking hills are made up of houses featuring various shades of ochre found naturally in the surrounding rock, giving this village its charm. It’s the contrast of the blue Provençal sky against the red, brown and yellow shades of its ochre cliffs – an exceptional combination of colours – which make this village such a magical place. Situated at the foot of the Monts de Vaucluse, Roussillon is classified as one the most beautiful villages in France. 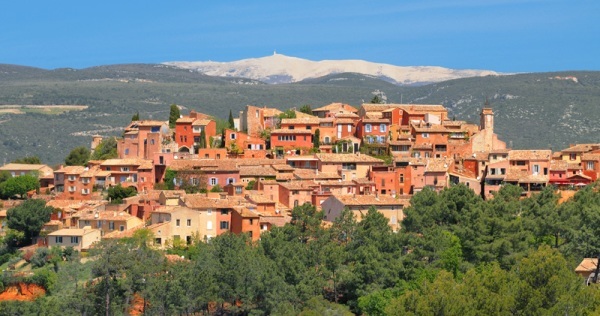 Ochre is a natural dye that has been used since prehistoric times. At one time, 17 different ochre tints were quarried in Roussillon and were exported all over the world. The area of ochre in the Luberon valley is the biggest in the world, giving the area the nickname the “Colorado Provençal”.

In Roussillon, take a walk along the footpath of the Sentier des Ocres to appreciate the beauty of the ochre cliffs. And don’t miss the 19th century clock and bell tower, topped by a wrought-iron belfry, located within the village.

Thursday is market day in Roussillon, but the market’s not as large as the one in Gordes or Bonnieux. There’s a lovely little pottery shop in Roussillon (Marchand de Couleurs) that’s definitely worth a visit.

The view from this pretty village is wonderful – out across the valley floor with its patchwork of orchards and vineyards, towards the equally picturesque perched village of Lacoste across the Vaucluse plateau. 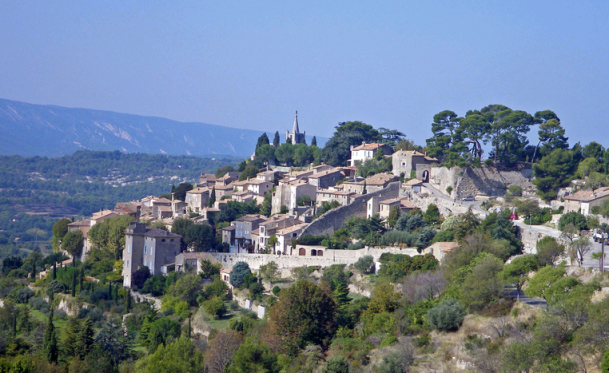 At the top of the village is the 12th century, Roman/Gothic ‘Vieille Eglise’ (old church), and near the bottom is the much newer (1870) New Church (‘Eglise Neuve’). The old church, surrounded by cedars, is now out of use. But it’s well worth climbing up through Bonnieux to the top for the views of the Monts de Vaucluse, Mont Ventoux, and also Lacoste, Gordes and Roussillon. In July the church is an atmospheric setting for classical music concerts. 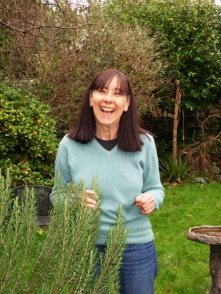 There are some fine houses in Bonnieux dating back to the 16th century, and the village’s relative opulence dates back to this period when several bishops chose to live in Bonnieux when this area belonged to the Popes. On Fridays there’s a pretty market at the bottom of the village with local crafts and produce. And whilst you’re in Bonnieux, it’s worth a visit to the bread museum, the Musée de la Boulangerie, in a village house, in the rue de la République. This Easter (Sunday 20th April and Monday 21st April), there’s a pottery market taking place in Bonnieux that could be worth a visit if you’re in the area.

Many thanks to Sue for this inspiring and informative post!