Greeting dear readers and friends. I hope you’ve enjoyed these last few weeks of summer, and I’m delighted to be able to present to you a book review and giveaway on the blog today.

I was very pleased to be asked to review Martin Bailey’s follow-up to Studio of the South: Van Gogh in Provence. You may remember that the book was featured on the blog a few years back and it gave us an intimate look at the painter’s life in the city of Arles where he set-up his studio in the Yellow House and enjoyed a brief, but turbulent, artistic collaboration with Gauguin.

Starry Night: Van Gogh at the Asylum recounts the difficult decision that Van Gogh undertook to leave Arles in 1889 and place himself in an asylum, Saint Paul de Mausole, outside the town of Saint Rémy de Provence. Following the unfortunate “ear incident”, and with the consent of his brother Theo, the painter embarks on just over a year’s stay at the asylum which will prove both personally tumultuous and artistically enriching.

Van Gogh was fortunate to be admitted to such an institution as Saint Paul as the care at other asylums around the South of France at the time, notably Marseille, was notoriously unfavorable and did not have the serene quality of Saint Paul. Despite being surrounded by other afflicted souls, some in severely distressed emotional states, the painter had access to exquisite natural beauty in the form of the asylum garden and surrounding Provençal landscape.

Van Gogh was free to roam the garden and used this opportunity to observe and paint its natural splendor. The grounds seemed to have had a calming effect on the artist, and he created several paintings of the garden featuring irises, lilacs, pine trees with growing ivy, poppies and butterflies.

Garden of the Asylum,1889
(image: impressionistsgallery.co.uk)

The painter was also allowed to leave Saint Paul on excursions into the countryside where he painted images that captured the essence of the region; notably olive groves, wheat fields, and cypresses – all under the backdrop of the well-known Alpilles (little Alps) mountain range.

Unfortunately, Van Gogh also experienced several crises at Saint Paul; some of which kept him confined to his room or impeded his ability to leave the asylum to continue his landscape work. Nonetheless, the painter seems to have exhibited a resolve that went beyond his mental and physical state as he remained incredibly “lucid and self-possessed”. From his “Saint Paul” period there are just over 150 surviving paintings, with another one or two dozen which have been lost. This represents a picture every two days. 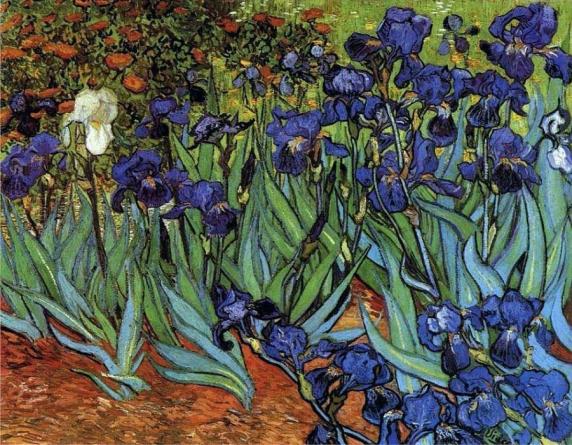 The author also gives us the very detailed and captivating history of one of Van Gogh’s most famous works: Starry Night. Painted during the artist’s time at Saint Paul, it is most likely based on Van Gogh’s observations of the night sky and not a reproduction of one evening in particular at the asylum. The artist “retained memories of having seen countless night skies, allowing his imagination free reign to create a stunning, highly personal vision”.

I was completely captivated by Starry Night. The book is both a beautifully stylized collection of art from one of the world’s most renowned painters, and also an extremely human tale of Van Gogh’s emotional and physical struggles.

If you’d like to enter to win a copy of Starry Night: Van Gogh at the Asylum, please leave a comment below telling us what inspires you most about the region of Provence.

One winner will be chosen on Saturday, September 29th at 12pm EST, using random.org.

Thank you and wishing you a lovely day from belle Provence.